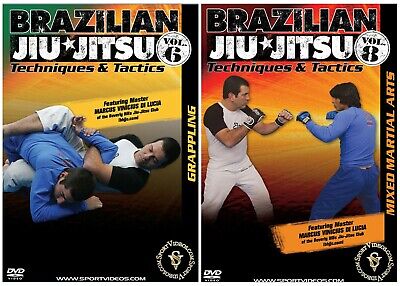 Brazilian Jiu Jitsu Vol. 6: Grappling Most fights will end up on the ground and any serious martial artist needs to know how to grapple. In this comprehensive DVD, Master Marcus Vinicius Di Lucia teaches you everything you need to know to become proficient in the art of no gi ground fighting. Among the topics covered are: passing the guards, sweeps and reversals, chokes, arm locks, leg locks, escapes and defenses. 96 minutes.
Brazilian Jiu Jitsu Vol. 8: Mixed Martial Arts The Mixed Martial Arts have become increasing popular over the past few years. Brazilian Jiu-Jitsu has become the foundation of competing in the MMA. In this unique program, Master Marcus Vinicius Di Lucia demonstrates the skills you need to master to become proficient as a competitive fighter. Among the topics covered are: striking, clinching, takedowns, ground and pound, and the guard position. 73 minutes.
About the Coach: Marcus Vinicius Di Lucia started training in Judo at the age of five. He won several titles such as State, National and International Championships. At the age of 17, he started to train in Brazilian Jiu-Jitsu. Marcus received a black belt in Judo in 1986 from Master Alfredo Dornelles. He also received a black belt in Brazilian Jiu-Jitsu in 1992 from Grand Master Fransisco Mansur. He is presently a 5th Degree Black Belt in Brazilian Jiu-Jitsu, 2nd Degree Black Belt in Judo and the owner of The Beverly Hills Jiu-Jitsu Club.

See what other people are watching